I’m eagerly awaiting the final chapter of Uncharted, “A Thief’s end,” to arrive in the post, knowing full well I’m not actually going to play until sometime tonight… As my son chews on my PS4 controller while I put this together (I’ve stopped 3 times on this paragraph already to protect my right trigger from his ever-growing collection teeth!). But this whole thing has me in a reflective mood as I realized Uncharted games had had such a positive influence on my gaming in the previous generation, and so have Naughty Dog with their astounding ability to create action-adventure games that, for me, are the best you can play. Owner Business 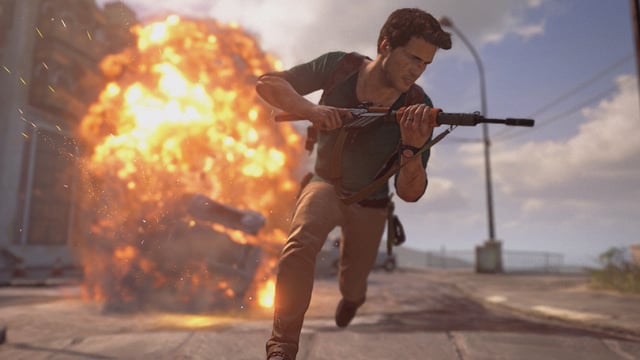 You may think this is just another PlayStation gamer gushing over an exclusive game. Still, my journey with Uncharted actually started as an Xbox 360 gamer who was playing happily away on the Gears of War series (that I love and will be playing number 4 asap too) plus other great games when my girlfriend at the time – now mother of said control pad chewing son and his big sister – proved she was the woman of my dreams when she bought me a PS3 for my Birthday (an age I’d happily trade my next Birthday for!).

So what was the game I put in first? Well, I picked up Metal Gear Solid 4 and Uncharted; knowing both were exclusives, I’d missed being on the Xbox. Next thing I’m flipping a coin to decide my fate, and Uncharted won out… I barely looked up from the screen for the next few days.

It blew me away with everything it did; it was the full package of everything I enjoyed in gaming; I continued to play through all the Uncharted games as soon as possible, and I’ve not looked back since.

The original title did so many things well; even the remastered version, which we reviewed, still stands out as a great title. Some stunning visuals and environments had you using platforming mechanics, executed in a way that really makes every jump feel a real grasp for survival. Action that rivals Gears of War that I’d enjoyed so much, but best of all, a real sense of action movie adrenaline with characters and story that made the game the full package for me.

And this was only the first game; the sequels – which I’ll move onto soon – took this to the next level. But like any great film series or books, games with great sequels start from ambitious originals that may not be perfect, but they really push the genre to the next level in what they try to do. The original Uncharted did that for me, and I’ll always remember it fondly.

An introduction to both Nathan Drake and Nolan North’s ability as a voice actor for gaming also came with the first game. Perhaps something we take more for granted in the series days, but the voice acting of the characters in the Uncharted games is just as important as the other elements of Naughty Dog’s creation. Nolan has made several characters awesome, one of my other favorites being the lead in Spec Ops The Line as Captain Walker, an amazing game that everyone fond of the third-person shooter should play.

But Nate is his best performance (although my daughter may say he’s pretty good in Blaze and The Monster Machines, too), and he’s made the character one of the best in gaming; why?

Well, because you like him, he’s a bit of an idiot most of the time. He’s not a typical hero, and while he’s not exactly an anti-hero like Joel from The Last of Us, I will get to later on in the article – he makes some stupid decisions and gets himself in a right mess most of the time. But this makes him identifiable as a character and only makes his story stronger for me, especially as the series progresses.

But what also does it for me is the supporting cast with Sully, played so perfectly by Richard McGonagle, hits the supporting role perfectly alongside Nate and some well-created female characters, too, played by Emily Rose and Claudia Black. This gets better as the sequels come in and more of Drake’s past becomes clearer.

That can also be said for the action, visuals, and action-movie feel to the game as the series goes on too. Like most gamers, I would say that the second game, Among Thieves, is the best of the Uncharted games. I’m not going to have a big fight with anyone who says 3 was the best because it was amazing. The airplane sequence followed by the desert scene is one of my favorite moments in gaming. But for me, the action, platforming, and overall feel of Drake’s story in the second game are the best so far.

But then, I haven’t played 4 as I write this (day one patch is currently downloading as I read this article!), and I feel this will blow me away. I avoid spoilers and reviews generally when I want to play something as much as this game, but the words “Naughty Dog’s best game” have been said, and that is one hell of a statement.

Even though they are apparently naughty, the Uncharted games are only part of my affection for these developers who really need to let out the dog house now and give a nice tasty treat.

Before the obvious, I’ll say this about my first love with Naughty Dog’s work; Jak and Daxter are amazing and a series I couldn’t stop playing. Having just finished Ratchet and Clank (and doping my best with typing up the review), which in summary was awesome, I really hope these two make it to PS4 as well.

But we get to my current favorite Naughty Dog game, The Last of Us. Now without pouring my heart out about it, and I could easily do another 1k word on just how good it is, TLOU changed gaming for me. It brought emotion out of me that a game never really has before. I was really saddened initially, and I went up and down throughout, especially the David scene with Ellie.

None of it good for a man with a daughter to experience.

But without the Uncharted games, this could never be, and adversely, the new Uncharted is certainly going to close Nate’s adventure off with a lot of lessons learned from TLOU. Getting that emotion into the game is what I’m looking forward to most.

The Uncharted games have had a massive influence on my gaming and Naughty Dog, too; I certainly can’t wait to experience more of it this week. So, as an end to this, I will say, should I be lucky enough for someone to check this out from the studio, thank you, Naughty Dog, for what you’ve made so far, and I’m thrilled to be experiencing Nathan Drake’s final chapter.

And that is about to start! It looks like I’ve typed for so long that all is downloaded and ready to go! Now, if I can find a place to stash my Son, I’ll be fine…