I get asked the same question very often, how to build a computer? It can be very deceiving to the average person’s eyes when they glance into an open computer. There are different “pieces” to be found and quite a few wires running around from one part to the next. All of this can be quite confusing and discouraging. The best advice I can give is that it looks more complicated than what it actually is. Don’t be afraid to do some trial and error to figure things out within reason. Of course, you have to be careful and not force components in spots they do not belong to, but it isn’t easy to mix up as most things can only go one way and only fit in the correct location. Over the years, it is how I learned most of what I do today, trial and error. One something goes wrong, there is always a way to fix it, and sometimes it just takes some patience and research to figure out a way to fix the problem. The Haze 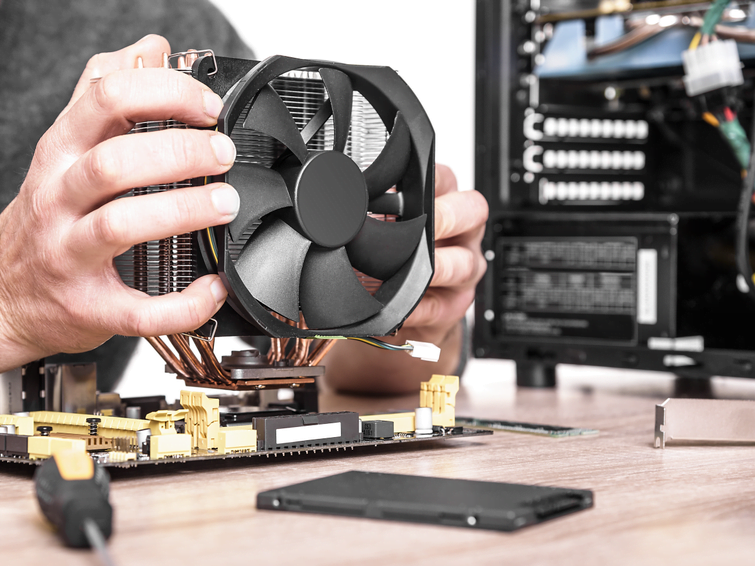 I started building computers around 1996 when I was ten years old, and it became a hobby of mine that led to a business about 16 months ago. Over the years, there has been a lot to learn and pick up on, which is the thing with technology and computers. Computers are always changing and updating for more performance, reliability, smaller size, ease of use, and less energy consumption in more recent years to become “green” on the environment.

But that is enough with the history; it is now time to move onto the actual computer building process from start to finish. There is quite a bit to cover, and there are many ways to go about the process, but I will share my personal views and opinions along the way.

To start things off, you have to ask yourself what you want the computer for. It could be a basic machine for simple web browsings, such as Facebook and E-mail. Another need could be simply for a media center, a computer hooked up with an entertainment center for movie watching purposes, music, recording, and internet television, as well as any other uses hooked up to a television full time. The machine may be used primarily for gaming. A gaming computer can be a touchy subject as everyone’s views are different. Some may be happy with playing a game on a lower setting, and others may want everything turned up to the max with room to spare for future game titles. The final use I will touch into would be photo and video editing. A lot of times, a high-end gaming computer and a photo/video editing machine will have many similarities.

You do not necessarily have to have a compelling system for videos and photos, but it will certainly cut down on time required. If someone is looking to produce lengthy videos, it could take ages to accomplish a less powerful computer. I will say that no matter what you are looking to build a computer for, figure out a budget of available funds and go from there. There is no sense in looking at very costly premium components when there is just no budget for them. Many would be quite surprised at how inexpensive a fairly powerful system can be “nowadays.” I never recommend buying the latest and greatest as it will cost a premium and be replaced by something better in around six months. That is just how the computer world works.

Once the purpose of the computer and a budget are planned out, a handful of main components are required to assemble a fully functional computer. These core components include;

The chassis, which houses and protects all of the components,

The power supply (PSU), which supplies power to the computer from the wall,

Motherboard, which is the central location for all the components to communicate with each other,

Graphics card, which is responsible for putting an image on your computer screen that you can see and interact with,

Processor (CPU) which functions as the brains of the operation, calculating millions of operations every second,

Hard drive, or hard disk, which is the permanent storage device, holding all of the user’s data and programs,

Removable storage such as CD/DVD/Blu-Ray readers and burners, USB drives, and other storage devices.

The first component we will start with is the motherboard. This is pretty much the central location where everything plugs into. The motherboard is full of “highways,” which pass data between all the components. There are many kinds of motherboards available; most commonly, there are AMD and Intel-based boards. An AMD bases motherboard must be matched with an AMD processor and vice versa. An Intel-based motherboard with an Intel processor. There are also different form factors, or sizes available, which must be matched with a proper case for a proper fit. Most commonly, there are Micro ATX, ATX, Extended ATX, and more recently Mini ITX, which is very small for when space is minimal, such as in an entertainment center.

There are also other sizes available, but these are the most common platforms I deal with. The computer case chosen must be compatible with the size of the motherboard; if the motherboard is an ATX form factor, the case has to support an ATX size. Another main factor to take into consideration is the type of socket. The processor (CPU) mounts onto the motherboard, and the socket must be the same. Both AMD and Intel have their own sockets and naming schemes. For example, a modern Intel machine may be a socket 1155, and an AMD machine may be an AM3 socket. So if the motherboard is an 1155 board, the CPU must also be 1155. Just be sure to do your research and make sure that the chosen CPU and motherboard are compatible with each other. It is worth noting that a CPU cannot be returned after purchase unless it is defective. So a mistake pairing up an incorrect CPU with a motherboard would not be a good thing to happen.

The processor or CPU is a small chip made of silicon wafers that calculate millions of numbers extremely fast. In the computer world, everything is a binary system that is made up of ones and zeros. Different combinations result in different things. The CPU is usually referred to as the brains of the computer. On modern Intel processors, the contact side contains many pads that make contact with pins on the motherboard socket. AMD is the opposite having the pins on the CPU itself and the pads on the motherboard. Quite a few years ago, Intel also had the pins on the CPU, but that changed over the years. I remember having bent pins and straightening them out with a tiny pointy object. That would be very hard to do nowadays as more than over 1,000 pins close to each other.

A processor makes a significant amount of heat and needs something to keep the temperatures under control. Otherwise, in a matter of seconds under a lot of work, a CPU would “burn” itself up and become a paperweight. In most cases, a heat sink and a cooling fan will accomplish this task. A thin layer of thermal compound is applied in between the processor’s surface and the heat sink to unload heat optimally. A heat sink will usually be made up of several cooling fins, which are then cooled by a fan blowing air across. Many retail boxed AMD and Intel processors will come with a stock cooling solution that is sufficient for the average user. The manufacturer will not sell a cooler along with their product that is not adequate. An aftermarket cooler may be chosen for less fan noise or for those who like to push their computers past the manufactures settings, which creates more heat, resulting in a higher performing cooling unit.

Previous Post Computer Conversion Clips: Learn Why Clip-On Computer Reading Glasses Are Not All Made Equal

Next Post What to Do If Your Computer Does Not Start